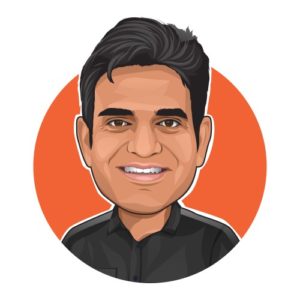 Hello and Welcome. About Ranjit Kulkarni

Ranjit Kulkarni is a writer based in Bangalore India, best known as the creator of Jigneshbhai and Swami.

Born and brought up in Mumbai by a police officer and a homemaker, he was educated at NIT Warangal and IIM Lucknow. He spent 22 years in the Technology and Consulting Industry before taking up writing books. When not writing, Ranjit is often found reading, tracking the stock market and talking to his wife and son on philosophy (though he suspects they rarely listen).

He created Swami, the confused bloke with a heart of gold and Jigneshbhai, his wise friend and advisor. They have featured in many of his blog articles and books with their discussions and exploits, pursuing a world of their own. Other characters like the wealthy old man and Deja the spiritual dog add a flavour of comic philosophy to Ranjit’s writing. Ranjit’s writing style, according to readers, blends the humourous with the spiritual, the mundane with the meaningful, and often revolves around philosophical musings peppered within tongue-in-cheek, slice-of-life anecdotes.

Ranjit married Kshitija on the last day of 1997 and, with their son Parth, they live in Bangalore India. Ranjit is reachable by email at ranjit@ranjitkulkarni.com.

Check Out Ranjit's Books on Amazon