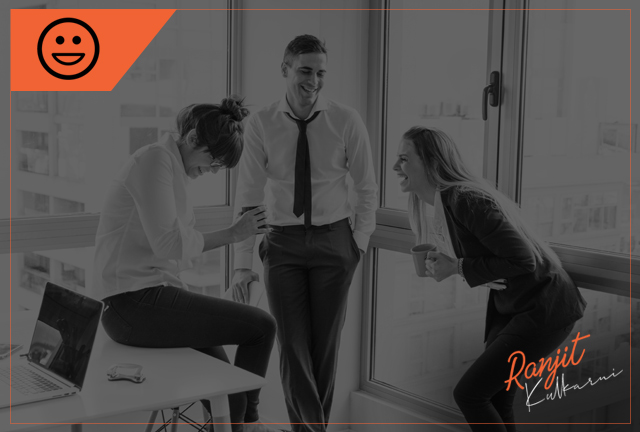 The one thing Jigneshbhai likes is a quiet life. He is not the kind who gets restless and worked up when there is not much happening. Give Jigneshbhai his daily freedom, his daily work and his daily food, and the company of a few loved ones and friends to talk with, not all the time but off and on, and he will be happy for days on end.

So, when he called me with a lot of trepidation, which is rare for a person like Jigneshbhai, and said, “tomorrow we meet at Swami’s house”, I couldn’t stop myself from asking him what the matter was.

“Swami needs to be home as he is getting his house painted,” he replied, sounding rather colourless for a generally cheerful man.

Painting can be a fairly messy affair as all of you might know. With Swami, generally even the smallest of things can assume epic messy proportions. It was no wonder then, that Jigneshbhai was worried that his quiet life might undergo some short-term turbulence.

At the entrance of Swami’s house, we were welcomed by a bunch of chappals indicating that there were visitors before us already inside. We saw a few boxes of paint lying on the floor. Next to them were a few brushes. I could see a big can of what looked like white paint and another with some white paste. There was a big wooden ladder and lots of waste papers and plastic sheets lying on the floor. There were three people who themselves looked painted and we gathered that they were the painters. Swami had a big catalogue in his hand and was standing in the middle of this mess.

“How will pearl organza look on this wall?” He suddenly asked. Jigneshbhai and I wondered if he was asking us. We leaned forward to check the colour Swami was pointing to.

“It’s nice and sober,” Jigneshbhai remarked. “But it’s almost like that white paint,” he said, pointing to that big can on the floor.

“That’s not white paint, Jigneshbhai. That’s the primer, and next to it is the putty. They will put 1 coat putty, 2 coats primer and 2 coats paint on the walls and 2 coats putty on the ceiling,” Swami explained with finesse.

Swami described putties, primers and paint with the familiarity of idli, vada and sambar that he has for breakfast every day. I don’t know about you, but I have noticed that there is something about painting one’s house that makes one an expert in all things related to paint. It takes over your life. Swami was no exception. Primer, putty, emulsions, enamels, textures all became commonplace terms as if he had been painting houses for years.

“But pearl organza is not white. Come look here,” Swami called us. He opened a set of colour shades from his catalogue and held them up, presumably so that we can see them in the light. Apart from pearl organza, there were winter mood, oatmeal cream, eggshell mist, bone charm and various such shades. Jigneshbhai briefly whispered, “Why does white have such exotic names?” But I left his question at that for the moment. All of these shades seemed more or less like white to me and Jigneshbhai. But people who paint their houses probably get a third eye which enables them to see invisible tinges in shades that other mere mortals can’t. You have to have the eye for seeing them which is revealed to you only after you spend a few hard days of penance with putties, primers and shade cards of paint.

“See, this one has a tinge of ivory, this one has a light biscuit shade, and this one has a slight coffee shade, very light, not like our strong filter coffee but the milky coffee we get up North,” he explained with a rarely seen passion for colour combined with an often seen passion for coffee. I could sense that, given the late afternoon hour, Jigneshbhai was thinking more about real coffee and biscuits than the ones whose tinges Swami was pointing out in the colour. But he said, “Yeah you are right, so that’s pearl organza with the slight coffee shade, it’s not white”.

“Yeah it seems to have a mix of ivory and coffee shade,” I added, not to be left out. Actually, I hadn’t seen any coffee or ivory there. But it would look bad that we didn’t get it after such passionate explanation. So, some participation is a sign of decency. But it turned out that both of us were bad students of colour.

“Actually, the other one with the biscuit shade is pearl organza,” Swami corrected both of us.

Our colour vision clearly left a lot to be desired. Thankfully the real coffee and biscuits arrived, saving us any further embarrassment, and Jigneshbhai and I got some relief. We focused on the real thing and let Swami continue.

“We are using luxury emulsion on the walls and premium oil enamel on the windows and doors.”

“One of the living room and bedroom walls will have texture paint. We are thinking of some shade of gold rust and roast saffron.”

Jigneshbhai and I looked at each other blankly wondering what is canvas and ragging. It was like the surprise quiz question in a class you aren’t paying attention to. Listening to this medley of colour standing in the middle of plastic, paper and paint felt a lot like ragging to us. But these were relatively minor inconveniences for Swami who was lost in the world of painting.

“See they have provided us with this visualization. This is how canvas and ragging textures will look,” Swami opened his laptop and showed it to us. He had developed a nonporousness that his walls had developed after 2 coats of putty. No amount of failure to answer questions on our part shook him from his mission.

Canvas and Ragging were names for texture paint, Jigneshbhai and I deduced.

“Wonderful technology,” Jigneshbhai remarked continuing with his encouraging exclamations. “The gold rust looks good,” I added with a tone of positivity too. This time Swami smiled indicating that I had got the colour right.

Our interest in visualization triggered further explanations from Swami. As I said, he was a man on a mission.

“On every texture we get 3 colours, 1 base coat and 2 topcoats,” Swami began. We thought he had finished but clearly he was not yet done. “So first they put the putty, then the primer, then the base coat. Then the topcoats are put in a manner that the output is textured. Like this,” he showed us and opened a demo video.

Swami told us the recipe for textured paint with more gusto than the recipe of his favourite death by chocolate sundae. It almost sounded like one brownie at the bottom, then add vanilla ice cream, finally topped by layers of hot chocolate sauce and whipped cream. Or probably Jigneshbhai and I were just hungry.

We watched the demo video with as much keen interest as we could muster at that late stage of Swami’s painting education class. Our approach was similar to students paying sincere attention in the hope that the professor will finish the lecture fast. One eye on the class and one eye on the clock waiting for the bell.

It seemed to have paid dividends because Swami closed down his laptop after the demo video ended. Jigneshbhai knew that lecturers get it. He was an expert at giving the right signals. Jigneshbhai and I had finished the coffee and thought it was the right time for us to make a move. We told Swami who agreed, sounding satisfied with the paint talk and our attention so far. We started walking to the door. Swami got his car keys and joined us on the way out.

Jigneshbhai and I were happy that Swami was joining us, so we can now have our regular coffee at our regular cafe. The wealthy old man and Deja must be waiting, I told Jigneshbhai. We thought we had come through with flying colours. That’s when Swami announced, “Guys, I think we have some time. Let’s go to the curtain store now as I need to choose matching curtains for the new wall colours.” He must have been truly encouraged by Jigneshbhai’s and my attention in his class as he added, “It won’t take long, now that you guys have also seen the colours.” As we stepped out, he told his wife that she needn’t worry, as his friends will help him make the right choice. The presumptions that friends make, Jigneshbhai and I thought, but let things be, for the moment. So that was that. I told you that Jigneshbhai was right when he worried about turbulence in his quiet life.

Excerpted from the book “The Good, The Bad and The Silly” by Ranjit Kulkarni. Available on Amazon Kindle Store worldwide and as a PDF eBook on ranjitkulkarni.com. Paperback available on Pothi.com (in India) and on Amazon.com (only outside India).

Follow Ranjit Kulkarni on his Amazon Author Page to hear about his latest books and get updates from his blog.